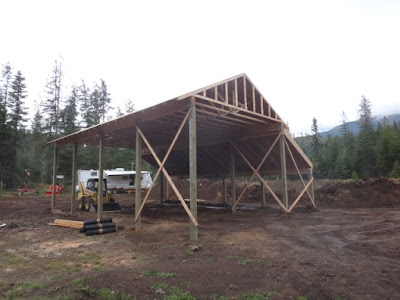 
2013 - After seeing the amount of snow from the first winter with the travel trailer on the property it was clear we needed to have a cover to protect the trailer from the heavy snow loads.  After considering several options we decided to build a 20'X40' covered structure with an additional 10' shed roof on one side to be able to place equipment.  The structure would be open initially so we could have full use of the trailer on a year round basis.  The orientation of the structure was such that we could have one side of the roof facing south so that we could install solar panels. We would put the additional shed roof on the north side and collect rain water. We would install a 12 volt power system with 4 150 watt panels, an inverter and about 1500 amp battery bank.  In addition we would install a small septic tank and drain field to connect the RV.   Under the shed roof, we would have a small equipment trailer (8X12) to store the battery bank, inverter, backup generator, and some gear that could be stored whenever we left the property.  We built the RV Cover in the summer of 2013 and was ready for the winter.  This setup worked very well, and we were able to stay at the trailer year round, even at times when the temperatures reached 10° below zero.  In the winter, we did
'dry' camping and winterized the trailer draining the water tanks, and water lines.  We were able to also store a small tractor, and our UTV under the RV cover to provide protection in the winter, as well as to store firewood for an outdoor fire pit.  We used this setup to stay during our weekly trips to the property from fall of 2013 to Spring of 2015 until the cabin was ready for us to start staying there.  The plan is that we will ultimately close in this structure and add two large doors for moving the RV in and out and to act as a storage building in the future.