First Adventure - Setting up an RV 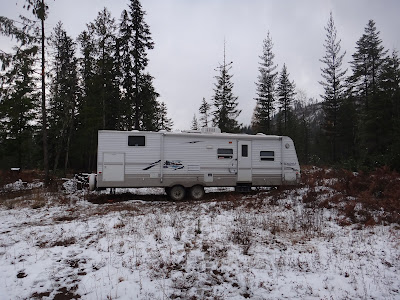 One of the first things we did after the purchase of our property was to purchase and place a 32' travel trailer on the property so we would have a place to stay and work as we visited and planned out our development strategy.  We needed to select and place a travel trailer up on the property before winter set in but there were some tricky logistics involved. We were still living in TX at the time and had limited windows of opportunity of when we could visit the property. We had actually visited the property in January 2011, closed on the property in the spring and made our first official visit in the summer to scope out the property and find the property corners.  It was not until November that I was able to get back up to visit the property. In the course of less than a week, I had to find and  purchase the RV, get it delivered to the site, and wrapped up  before the first snow.   This was about a week before Thanksgiving. I remember it was dusk during the first snowfall as we were bringing in the trailer to the property. I also remember a moose greeting us in the roadway at the entrance to our property as we were bringing in the RV looking at us as if to say, "what do you think you are doing here?".  It was a mad rush to get the RV onto the property, unloaded, and get out before the snow got too bad.  In the rush of trying to get the trailer unloaded and setup, I didn't realize I had dropped the keys to the trailer somewhere in the snow, where they were to remain until we came back in the spring/summer. 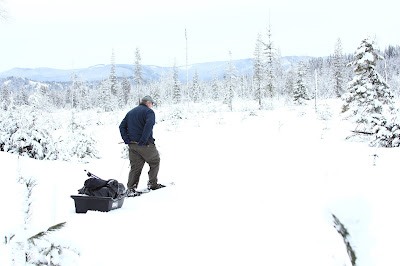 March 2012 - Snowshoe hike in to property 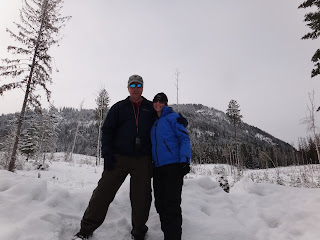 Getting ready to snowshoe to property 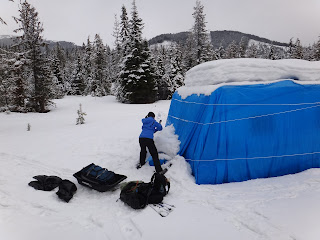 March 2012 - Not quite the spring we expected


I realized very quickly that I had a lot to learn about the specific characteristics of the property, the amount of snow and access to the property.  I would soon meet some our off grid neighbors, who would prove to be very helpful in keeping us up to date as to the snow levels and access, so we would not be surprised in the future.   All in all, it was a great adventure for my daughter and I and will provide a lot of stories and laughs at my expense in the future.

My next trip up was in the April 2012, in which I finally got the trailer setup for use.  I also realized that I did not want to have the trailer exposed to the heavy snowloads in the future and began to consider what type of structure would be needed to cover and protect the trailer before the next snow season. 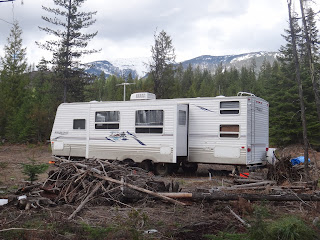